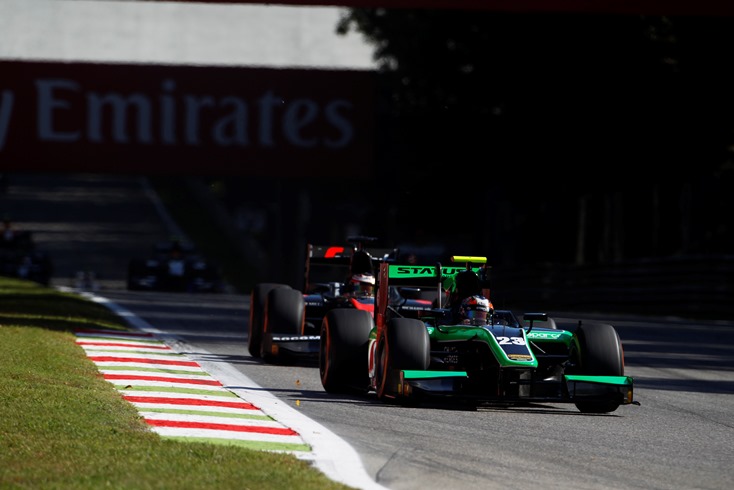 Starting from fifth place on the Sprint Race grid GP2 rookie Richie Stanaway made a great start exiting the first corner in second place. He looked strong in the opening laps chasing down Pic for the lead. It soon became apparent that he did not have the pace to fend off McLaren F1 Junior Stoffel Vandoorne and fellow Kiwi Mitch Evans who passed him for fourth place on lap seven, a position he maintained until the chequered flag.

Marlon Stockinger had a difficult morning after his DNF in Saturday’s Feature Race forced him to start from the back of the grid. Following a good start he made up several positions but in a relatively processional race he was unable to make an impact, bringing his car home in 19th place.

Richie Stanaway “I had a good start with me and King trying to out brake each other into the first corner. Because he braked a little bit later he couldn’t get the car stopped and took himself and the car in front out. I had to go over the chicane to avoid the accident and came out second. At that point I fancied that we were on for a win or at least a podium. About three laps into the race I realised that I didn’t quite have the pace to catch Pic and then Evans and Vandoorne were just too quick and passed me. I had to try really hard to keep fourth place and once I was out of the DRS zone I dropped back from the leaders. I couldn’t do much more today and I can’t complain too much with two fourth places here in Monza. I’m really grateful to the team for the turnaround in performance and we are looking competitive again.”

Marlon Stockinger “After the DNF yesterday it was always going to be tough from the back of the grid. I think everyone had a pretty clean start but the race became pretty processional and I was just stuck, unable to move forwards. It was harder to overtake than expected round here in Monza. I had nothing to lose and made an ambitious move on one of the Arden cars but there was already another car in the middle of the chicane and unfortunately I tagged him losing a piece of front wing. There was no performance loss from that but it cost me a few positions. I had to try something and make things happen but it didn’t pay off. In such a processional race there was not much we could do.”